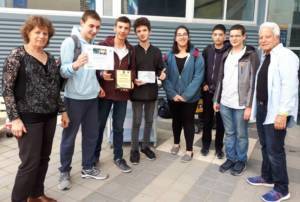 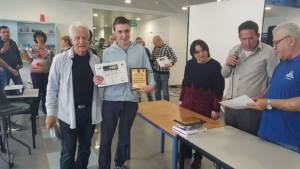 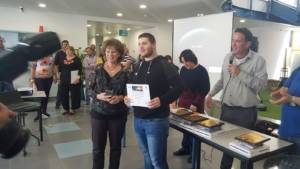 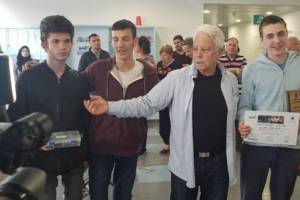 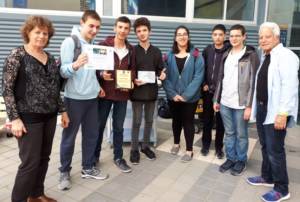 A great success for Sci Tech Avin Ramat Gan  students in the National Robotics Contest. The contest took place in the Haifa Technological Center on March 18. The students brought a lot of honor to our school by winning two top awards: first prize in the category of Innovation for Remote Care Systems, and third prize in the Digital Content category.

“This National Robotics Contest has been held for 20 years,” explains Zvia Gadnir, Head of the Robotics-Oriented Mechanical Engineering Programme at Sci Tech Avin, who also directed the contest. “This contest is held every year, in different locations, encompassing dozens of schools and over 600 students. This year we had 42 schools competing, and the contest includes several categories,” explained Zvia.

First prize in the category of Remote Medical Care was won by a team comprising 11th-graders from the Cyber Programme and tenth-graders from the Robotics Programme, led by Mr. Isaac Puntsch. “This cross-programme collaboration resulted in the construction of a very complex and innovative system,” explains Zvia Gadnir.

The third prize in the Digital Engineering Content category was awarded to Dean Luz, a 12th-grader in  the Robotics Programme, who represented our school.

Dean Luz, you won the third prize in the Digital Engineering Content category. What do you think of the contest?

“The contest was very interesting. I was involved in preparing the 3D model for our project, and I enjoyed this part. I took a walk to see what the competing teams had prepared, and saw some amazing works. I also got to talk with people, and made new friends, and I think that’s the important added value of this contest.”

10th-graders Ido Ostberg, Ophir Broida and Nadav Tirosh-Varshai took part in the contest and were among the first prize winners. What do you think about your project, and the contest?

“We enjoyed the project, and gained a lot from it. We managed to make the most of the process, and we hope to lead this platform next year, just as the 11th-graders had led it this year. Hopefully we’ll win major achievements in the coming years as well.”

11th-grader Guy Brotman adds: “the contest was a formative experience, both socially and cognitively. I’m glad I participated, and I’m proud in our achievements as a team. I would like to thank Tzachi Puntsch, our mentor, for his help and support throughout the process.”

The prize-winning system for remote medical care enables patients to receive medical care in remote places, where no medical doctors are available. This life-saving system can transmit medical parameters from anywhere on Earth. It is a successful product of the collaboration between the Cyber and Robotics Programmes, led by Mr. Puntsch, who works at the school as a volunteer.

Mr. Puntsch, what do you think about the students who participated in the contest?

“I was glad to meet students who were willing to experiment, voluntarily and on their own free time, with an additional task which does not bear on their grades. Robotics students and Cyber students came together, and using a microprocessor we created a communication channel to anywhere in the world. Congratulations to the students, and to the school that supported and encouraged them.”