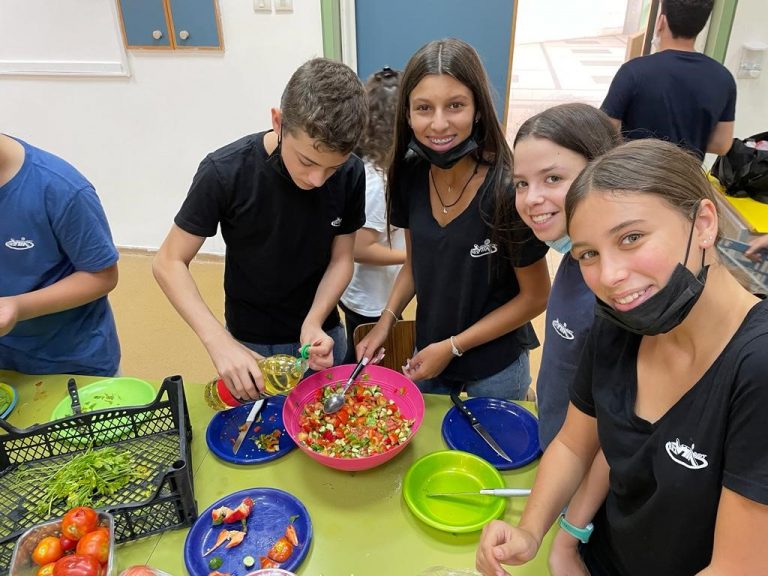 Israel Sci-Tech Greenberg Middle School in Kiryat Tivon joined the international SALL program this year, which encourages collaborations between schools and food community members. During the year, every 8th grade class deals with a variety of projects in this field, including solutions for growing food in space, educational gardening, extending the shelf life of food products, and designing a multifunctional trash can. The various projects are led by teachers Assaf Chertkoff and Tehal Itzhaki-Weiss.

One of the projects under the SALL program deals with food rescue – the need to prevent food waste that is about to be dumped by collecting it and exploiting it for use. The project began with a connection established between the school and Zehava Nabat, a local resident who deals with this issue independently. For years, Zehava has been collecting food products in her home just before they are thrown away and transferring them for use by various elements in the community.

Zehava told the school principal that she had a dream: to feed the school children with quality and healthy food that was about to be thrown away, thereby reducing food waste. As a result, the teachers and students decided to expand the private project, in which the school cafeteria will be restarted after it was disabled during the corona period, using healthy food that is about to be thrown out, thus fulfilling Zehava’s dream.

In order for the students to better understand how such a solution can work – it was decided that the best way would be through the stomach! The students were asked to prepare an entire meal with a variety of foods prepared from food residue that was about to be thrown away. This demonstrated to the students that indeed a lot of food is thrown in the trash even though it is in good condition and can be eaten. After that, the students began planning and designing the revitalized cafeteria, ahead of its construction and operation later this year.

From an early stage, it was clear that such a project required the support of the local authority to address the bureaucratic and technical aspects, therefore, a number of students wrote letters to the head of the local council explaining the importance of their project. Another critical component to the success of the project was finding funding. To find the right budget sources, the school contacted Daniel, a former student at the school and now a chocolatier who successfully launched a crowdfunding campaign to produce vegan chocolate. Daniel worked with the students on preparing a similar campaign.

For the benefit of the campaign, the students chose a logo and created a short video describing their project. At this point, the project is underway, and the goal is to finish it in the current year and next year, upon completion of the construction of the cafeteria. This is a project of great importance to the school since it strengthens the cooperation between teachers and students in the community of Kiryat Tivon.