In an impressive ceremony, held recently in the auditorium of Sci Tech Israel Aerospace Industry High School in Lod, 20 graduates of the RPV Programme (running for the fourth year) were given qualification certificates. This qualification will honour them with the privilege of serving in the technical wing of the Israeli air Force, and the authority to maintain Remotely Piloted Vehicles during their military service. The qualified students are all continuing their studies in Sci Tech Israel Aerospace Industry College, towards a certificate in practical engineering. The ceremony was attended by all the students in the school’s RPV Programme, including the “freshmen” from 9th grade, some of whom may join this desired programme next year. Honorary guests included Mr. David Dagan, Executive Vice President of Operations at Israel Aerospace Industries (IAI) who also acts as chairman of the school’s board of directors, Mr. Nahum Samuel, General Manager of IAI’s MHT Division, Mr. Yoram Holtzberg, General Manager of IAI’s MALAT Division, and a respectable entourage of Air Force officers headed by Major Ilan Iluz, Head of Qualifications Department in the Air Force HQ. 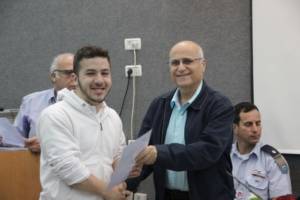 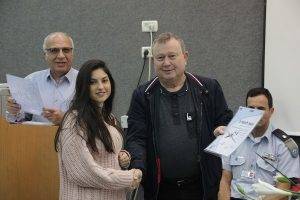 The School’s Head, Mr. Yehuda Chorev, stated that “the RPV Programme is the flagship of the programmes in our vocational high schools, drawing high-quality students. It is a shining example of a successful implementation of the vocational model – theoretical and technological studies in combination with practical work in a high-knowledge industry such as the IAI. “We wouldn’t have been able to reach such achievements without the support of these two factories, MHT and MALAT,” said Mr. Horev. He added that the RPV Programme has been nominated this year for the prestigious Sci Tech Education Award, and for him winning this award will wrap up things nicely, since the school had been previously awarded in previous years for the longer-standing programmes of electricity and mechanical engineering.

Mr. Nahum Samuel, General Manager of IAI’s MHT Division, and Mr. Yoram Holtzberg, General Manager of IAI’s MALAT Division, emphasized the pride and satisfaction they feel whenever they are present at the qualification ceremony. The expressed their appreciation and respect to the qualified and dedicated team of management and teachers, and promised to happily continue in assisting the school with any request in future years as well.

Major Ilan Iluz, the Air Force’s representative, praised the fruitful cooperation between the school and the air force, and pointed out that “The graduates of RPV programme which are already serving in the Air Force’s technical wing are doing their job as well as could be, and to their commander’s full satisfaction. He added that “we have here in the ceremony representatives from Palmachim Base, from Air Force Headquarters, and from the IAF Technological College, which comes to show how much all of us in the Force appreciate the huge investment  of the IAI in this school’ and the dedicated work of the school principal and the teaching staff.”

Mr. David Dagan, Executive Vice President of Operations at Israel Aerospace Industries, thanked everybody who’s been involved in the programme and expressed his hope that “The graduates will return, after their military service, to take on technical and managerial positions in the IAI.” We would like to note that Mr. Dagan is leading the construction of the school’s new and complex building, through a joint investment of the Labor Office, Sci Tech, and the Israel Aerospace Industries.

Ofra Yosef, the College Coordinator and Presenter of the Ceremony, along with Motti Dil the coordinator of the RPV Programme, thanked all the organizations for their fruitful collaboration and for the encompassing support the school has enjoyed. They specifically praised the teachers for their meticulous and professional work, and the graduates for their success in the Air Force’s Qualifications Exams: “Our graduates will be tested during their service not just for their professional skills, but also for their behavior in the field and the way in which they’ll express the values they’ve absorbed during their time in school, such as their ongoing aspiration for excellence and professionalism, their responsibility, helping your peers, love of people and love of the homeland. Our school, along with the whole distinguished forum assembled here today, is proud of you and trust you, and we have no doubt that you will fulfill your role in the airport with flying colors.”