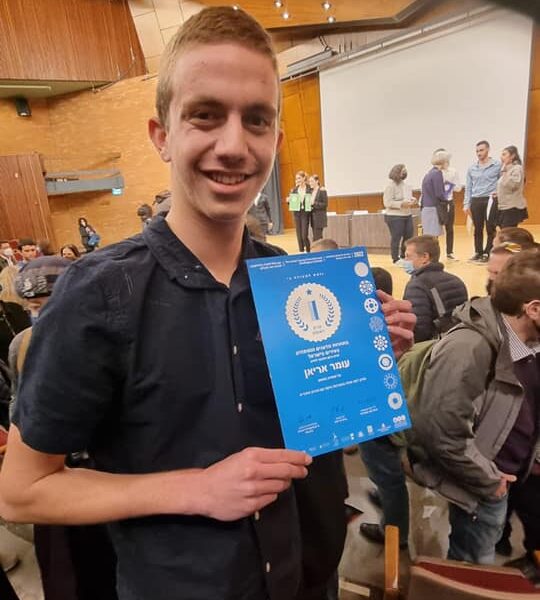 Omer Aryan, a 12th-grade student at the Sci-Tech School in Modi’in, won first place in the competition of young scientists and developers in Israel, and will represent Israel at an International Math and Science Competition in Atlanta, Georgia.

Omer participates in the “Alpha” program, which allows teens to integrate into the world of advanced scientific research, and conducts his research in Professor Avishai Eyal’s laboratory at Tel Aviv University. Winners of the national competition go on to represent Israel in scientific and development competitions around the world.

Omer’s research deals with the characteristics of phase noise in the sensory system with optical fiber, and accompanied by the research process is guided by the program, the competition, and from the laboratory, and the university.

Identifying infiltration into security sites, locating messes in the flow of gas pipes, or building foundation strength testing are just a few examples of areas that used optical fiber as sinks. In this work, he focused on phase noise, one of the dominant noises in these systems. The method that exists today for noise measurement, based on the measure of temporary stay in a single way is not practical for a very long phase noise measurement or a particularly coherent laser. For this reason, he built a system based on an optical ring featuring a coherent laser connected to a kilometer-long fiber that allows measuring the temporary presence at the same time. He modeled many light poles in fiber that are based on one laser pole. For every Pulse that entered the system he managed to adjust the phase value and thus showed that a large number of temporary delays can be measured in one measurement, even when the laser is particularly coherent. Through this system, it will be possible to significantly improve the precision of such systems and the quality of their users.