About our Training, Research & Development Unit

Israel Sci-Tech’s Training, Research and Development Center is a ground-breaking developer of innovative pedagogy and designer of some of the most advanced teaching and learning environments in the Israeli education system and exported to the international arena.The Center is the largest of its kind in the world.

Learn more about our educational game-changes such as Positive Psychology and teacher development.

Our Model has been exported to diverse destinations.

“Kids Lab” for children in the third and fourth grades: Students explore the wonders of technology, conduct scientific experiments and take their first steps in the principles of programming and engineering.

“Young Engineers” for students in eighth and ninth grades: Students study science and engineering subjects such as biomedicine, aerospace and the cyber world, through project-based learning (PBL).

Israel Sci-Tech designed the teacher guide and conducts extensive teacher training. The project aims to attract students to the science and technology fields, preparing them for relevant academic studies and careers. 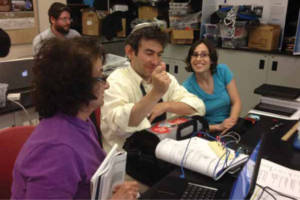 Launched in 7 schools in the New York area in 2011, this five-year project will expand to 35 schools.

This is a total solution for knowledge transfer. Israel Sci-Tech designed the teacher guide and conducts extensive teacher training. A dedicated website enables student-teacher knowledge sharing. Periodic pedagogic visits to the teachers are yet another resource for teacher support.

The program highlights Israel Sci-Tech’s talent as a leading developer and implementer of biotechnical and engineering sciences.

Israel Sci-Tech Schools Network’s Research & Development Center has partnered with the EU on a number of projects in the field of nanotechnology.

Nanopinion is the third in a chain of three projects for the EU (FP7), pertaining to learning about nanotechnology, some of which were led by Israel Sci-Tech through its Research & Development (R&D) Center. The project consists of 17 partners from 11 countries and its aim is to help the general public form opinions about future nanotechnology research and use by promoting discourse on the subject. This is done by introducing relevant information to various audiences and creating all kinds of activities to encourage informed debate about nanotechnology. 30 countries are taking part in the debate both online and at different events.

Nanochannels is a project funded by the EU and led by Israel Sci-Tech Schools Network. The aim of the project is to encourage students, industry, NGOs, politicians, scholars and the general public to take part in a dialogue about the advantages and disadvantages, opportunities and risks involved in the use of nanotechnology. In order to develop informed discussion, the project runs along several channels: printed press, radio, various social media such as Facebook and Twitter , and live events at schools, including two in Israel, Ramat Yosef Sci-Tech School in Bat Yam and Ebin Sci-Tech School in Ramat Gan.

NanoYou is a project led by the Israel Sci-Tech Schools Network to raise awareness of the issue of nanotechnology in EU countries. For the project, Israel Sci-Tech set up the NanoYou website in 13 different languages. The project was a great success and was followed by its sequel, Nanochannels.

NanoEIS  assesses: How has nanotechnology education been integrated into secondary schools and universities? How was cooperation between different partner institutions implemented? In which ways have industrial and non-industrial (social) employers been involved?

NanoEIS will make recommendations for curriculum content as well as for Best Practice strategies to implement these curricula. This will address the problem that education content is not always well matched with the needs of the job market.

Israel Sci-Tech Schools Network collaborates with Google Israel on a variety of projects, enriching our education with advanced ICT tools.

Teacher training is one such project and this has already reached over 15,000 teachers and educators in Israel (including employees of the Ministry of Education’s central and district offices and the colleges for teacher education).

Students gain a vibrant understanding of the connection between the 100 billion neurons in our brains and our behavior, the processes that lead to brain disorders and diseases and even realizing the potential of connecting the human brain to technological devices.